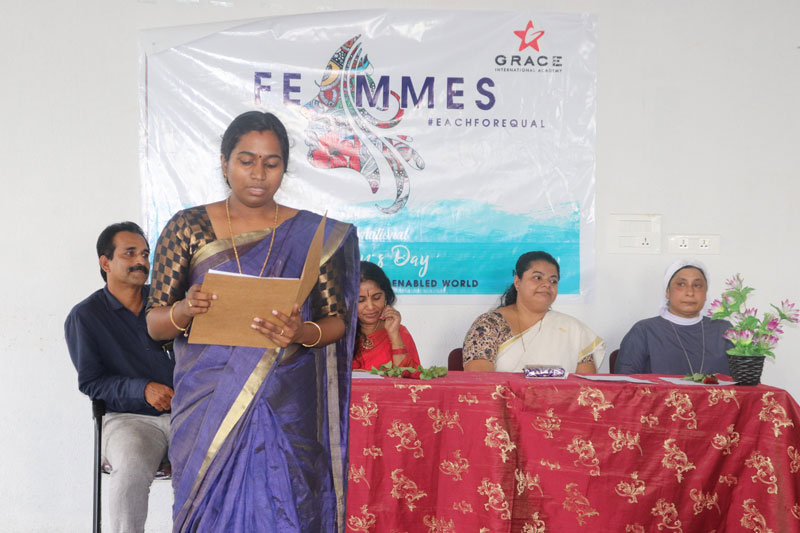 Today Grace celebrated International Women’s Day – FEMMES 2020. Grace too joined the bandwagon of UN women’s #generationequality campaign to accelerate and promote gender equality actions. Celebration of womanhood in all its multifarious forms is the first step towards creating a progressive roadmap for gender equality. Educational institution are the foci from where the posterity imbibes the essence of challenging gender norms, empowering each other, celebrating diversity thereby breaking the stereotypes and rejecting binary. Grace International Academy too wishes to pave the way in breeding a generation that’s progressive and at par with forging a gender equal world. FEMME 2020 was an enthralling event where Grace family united by joining our hands in celebrating the beauty and wonder of womanhood in all its nuanced shades of representation.

Mrs Ancy Roji was the chief guest for the occasion. Being born and brought up in the state of Maharashtra, Smt Ancy Roji is wife of Rev. Roji Mathew Abraham. She is an ingenious figure who apart from being a homemaker also engages in providing counseling services along with taking spoken English classes for students across numerous schools. Holding a bachelor’s degree in Divinity she’s is an exceptional figure who cherishes and spreads spiritual value among the young hearts and minds.

The guests of honour were Sr. Roselin – Director of Snehatheeram Charitable Society based on Vilakudy) and Smt. Brinda Punalur – a renowned literary figure based on Punalur. Both of them were honoured for their exceptional contributions in their respective fields of interest.

Sr. Roselin was honoured for her exceptional and outstanding contribution towards the well being of the downtrodden especially the mentally challenged, orphans and socially deprived fellow beings. She opened a home of mercy – Snehatheeram with the aim of developing and rehabilitating the overall, physical, mental and spiritual prosperity of its inhabitants. She is a legend who has devoted her entire life for the sake of uplifting the homeless and needy.

Smt Brinda Punalur is an equally deserving figure who is remarkable for her excellent contribution in the field of arts and literature and for publishing over thirteen literary works. She is a recipient of numerous renowned awards, making her an extraordinary persona who has succeeded in carving a space for herself amongst the literary canon. Her benefaction has made an exceptional difference in the society.

The occasion was made more colorful by the various cultural programs performed by Grace’s students collective who celebrated the concept of womanhood through their intense mime performance. A women empowerment themed poster competition was also conducted, wherein Hercules House won the first prize.